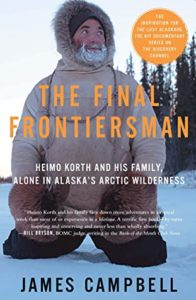 Over the past several weeks I’ve been watching a Discovery Channel series called The Last Alaskans about several families that have the last housing permits in the Arctic National Wildlife Refuge. It’s an interesting show about their lives out in the Alaskan wilderness; they build their own cabins, hunt for most of their food, and they make their living trapping, all while having their closest neighbors being over 100 miles away. One family in particular, the Korths, were so charming on the show that I started googling of course, and discovered that Heimo Korth’s cousin wrote a book about the family and their life in the wilderness! The Final Frontiersman : Heimo Korth and his family, alone in Alaska’s arctic wilderness (ebook/audiobook) by James Campbell was a quick listen. You get to know more about Heimo, his wife Edna, and their daughters who were born and raised in the Alaskan forests. It mainly focuses on Heimo’s story, who is not a native Alaskan, and how he learned to survive and thrive so close to the Artic circle.

If you have any interest in Alaska, people living off the grid, or just like stories about interesting people, check out this book!