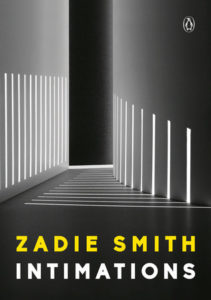 Zadie Smith’s Intimations is the first book I have read about the pandemic. It is a short book of six essays, written during the first half of 2020. The essays explore Smith’s thoughts and feelings at the beginning of what she calls “the global humbling”. Issues such as confinement, the relativity of suffering, and our compulsive need to fill time, intersect throughout.

The book’s opening essay, “Peonies”, recounts the author’s battle with fertility, and her sense of confinement as a woman within the context of death and social isolation. In “Screengrabs”, Smith is both critical and forgiving of our need to always be doing something.

Her most powerful essay is “Postscript: Contempt as a Virus”. It is worth reading on its own even if you do not get to the others. In it, Smith identifies a virus that has plagued the country since the very beginning. It is worse than hate, she says, because hate at least acknowledges you as a whole person. To have contempt for someone is to treat them like an animal, “both subject to man and a threat to him simultaneously.”

“Patient zero of this particular virus stood on a slave ship four hundred years ago, looked down at the sweating, bleeding, moaning mass below deck and reverse-engineered an emotion—contempt—from a situation that he, the patient himself, had created. He looked at the human beings he had chained up and noted that they seemed to be the type of people who wore chains. So unlike other people. Frighteningly unlike!”

While dealing with tough subject matter, these essays are also hopeful, empowering, and instructive. The final essay celebrates lessons Smith has learned from some of her favorite people. What stands out is a deep sense of gratitude to her family and mentors. Smith praises their unique qualities, especially their strength and compassion.

“People sometimes demand change,” says Smith. “They almost never demand art.” The writing in Intimations, however, proves that art can inspire change. It is a timely lesson and a call to action in the new year.

Intimations is available at Heights Libraries, and as an ebook and audiobook.