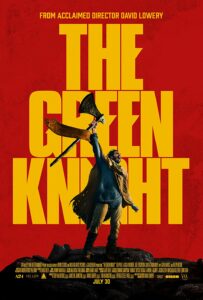 I recently saw a movie that has become one of my new favorites. The Green Knight follows a young knight in King Arthur’s court as he embarks on an epic journey. He is played marvelously by Dev Patel, who portrays both vulnerability and courage in the role of Gawain. Setting off on horseback from Camelot, Gawain encounters a band of thieves, a mysterious woman, and a talking fox before reaching his ultimate goal. And, in a late nod to National Poetry Month, I have to point out that the film is based on the 14th-century chivalric romance poem Sir Gawain and the Green Knight. The film is frightening, playful, and inspiring, and transports you to an earlier, more mythical age. Available at Heights Libraries on DVD and Blu-ray.