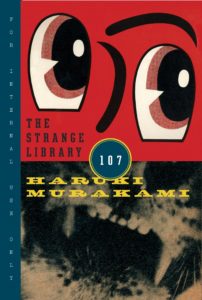 The cover resembles an old catalog card found in the back of a library book. You open it by pulling the lower half down and the top part up. I feel this is not simply a clever design, but alerts the reader they are entering a different world, the world of The Strange Library…

A young boy enters his neighborhood library in order to return some books. He tells the circulation clerk he would like to check more books out, and she directs him to Room 107. There, he inquires of a pock-marked librarian, with hairs growing out of his ears: does the library own any books on tax collecting in the Ottoman Empire?

The old man’s eyes glittered. “Ah, I see.” he said. “Tax Collection in the Ottoman Empire. A fascinating subject if there ever was one!”

After retrieving a set of heavy volumes on the subject, the man insists they must be read in the building, and guides the boy down a long, dark corridor to the Reading Room.

Once inside, our protagonist soon learns this is no ordinary library at all. In fact, he would like to go home…

“Why did something like this have to happen to me? All I did was go to the library to borrow some books.”

This is the first and only illustrated work by acclaimed novelist Haruki Murakami. His books often contain surreal elements, anthropomorphic characters, and young love. In this particular tale, a young boy forges an unlikely friendship with a doughnut-baking sheep man and a girl who can only speak with her hands.

Every other page of The Strange Library features a colorful graphic depicting the action. As always, Murakami uses his deceptively simple writing style to create deep emotional resonance.

I would recommend this book to anyone who enjoys Grimm’s Fairy Tales or the films of Hayao Miyazaki. The Strange Library is available at Heights Libraries and OverDrive.