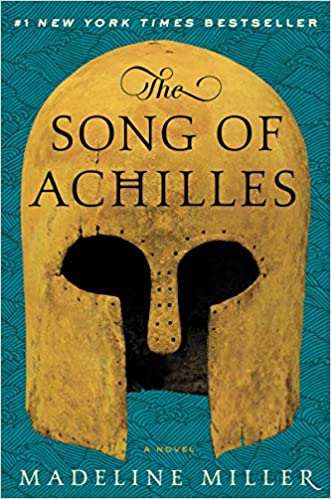 I have read several retelling’s of old tales and myths over the past few years, but I cannot think of a better one that I’ve read than Song of Achilles by Madeline Miller. Song of Achilles is a partial retelling of Homer’s Iliad narrated by Patroclus, Achilles’ childhood companion and, over time, Achilles’ lover. But this does not adequately describe the width and depth this book covers. Even though you know how the story ends, this retelling does not lack for drama or poetry.

The book begins with Patroclus’ childhood, well before the events of the Trojan War and the Illiad, born a prince to a father who found Patroclus’ sensitivity disappointing. After killing a noble’s son, Patroclus is exiled and sent to live with King Peleus of Phthia, a backwater kingdom where he believes he will be forgotten and unwanted. But Phthia is also the home of Achilles, son of Peleus and the sea nymph Thetis. It is here that their unexpected relationship starts, much to the displeasure of Thetis.

What I appreciate most about Miller’s retelling is her portrayal of the immortals who appear throughout the story. They are much more selfish and cruel than how they are portrayed in the old myths. Thetis is constantly threatening to wreck the blossoming relationship between Patroclus and Achilles throughout the story. Having been wed to a mortal, another myth that Miller reimagines, Thetis harbors a deep hatred of all mortals and believes her son should not be consorting with the likes of Patroclus.  Miller’s unflattering depictions of the gods/immortals, as well as Greek heroes like Agamemnon and Odysseus, make them more compelling characters. They become greater because their flaws are emphasized, not minimized as is traditionally done.

Patroclus himself is changed as well. Unlike the Iliad, where he is a noted warrior of Achilles’ Myrmidons, Patroclus in Song of Achilles is not a warrior. He knows how to fight, but he very pointedly chooses to not to receive more advanced training when he is presented the choice to do so. This change ripples into other areas of the story, particularly in regards to the women Achilles captures as “war prizes” during the war and how he and Patroclus interact with them. These changes, and the many other changes Miller makes, are so deftly handled by her that if you didn’t know better you’d think this was her story, not one of the oldest stories out there.

I listened to the audiobook of Song of Achilles on Libby, and I will close by saying this is how I think people should read the book. Frazer Douglas’ reading and voice acting adds another delicious layer to this story. Thetis’ voice is a rasping gasp, like a fish out of water. Odysseus sounds like your best friend, though you know you cannot trust him. And Achilles, shining and golden, sounds every bit the hero Patroclus believes him to be. Even Helen, who has exactly one line in this book, does sounds like the most beautiful woman in the world. I truly recommend you listen to this on a long car ride this summer if you like audiobooks. But whether you read this as an audiobook or as the physical book, you will certainly not be disappointed!

The novel Song of Achilles can be placed on hold at Heights Libraries, or you can get the ebook/audiobook through Libby/Overdrive. Once you finish, I also recommend Miller’s follow-up novel Circe, another retelling of classic Greek myths.