If you’re a bookish kind of person, and I am, it’s maybe been comforting to you, as it has to me, to see new books in a beloved series being published right on schedule, even while almost everything else has closed up and slowed down. I’m extraordinarily lucky to have had not one, but two, favorite series entries come out while Ohio has been Sheltering In Place At Home. It’s both a pleasure and a comfort to see some good things carrying on as usual. Reading will never let you down!

The book that came out in March is the fifth in a historical mystery series that I love. It’s called A Murderous Relation, and it continues the Veronica Speedwell series, and it’s by Deanna Raybourn. This latest installment is set in London in the autumn of 1888. Veronica, an intrepid butterfly collector with secret ties to the Royal Family, is commissioned by an aristocratic friend to rescue the Prince of Wales from an embarrassing scandal. The prince has gifted an extraordinary diamond to one of England’s most notorious ladies of the night, and his mother wants to get that jewel back, yesterday. Veronica and her handsome sidekick, Stoker (why, yes, there is a romance there!) go undercover one night into Madame Aurore’s den of iniquity, and things get more complicated from there. The characters are strong and the plot twists are entertaining and if you love historical mysteries, this one’s for you!

The book that came out in April is the third in a science fiction series, and hey, this series is written by an author who lives in Ohio! It’s called The Last Emperox (Emperox is pronounced emm-purr-oh and it’s a gender-neutral title for the ruler of the Independency, a confederation of planets and artificial habitats connected by an entity called the Flow, which is like an intergalactic river and which is collapsing), and it wraps up the Interdependency series, and it’s by John Scalzi. Grayland II, the current Emperox, is young, but she’s already survived more than one assassination attempts in the previous books. There are, all too sadly, opportunistic individuals who are happy to put themselves and their profits and their survival first as the Interdependency falls apart, and who want Grayland to fail in her mission to save as many of her citizens as possible. Scalzi’s style is rollicking indeed, and this is a really goofy space opera series that was just what I needed as a diversion from current events. 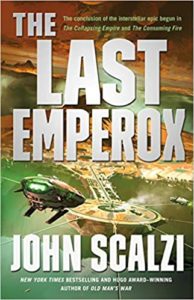 And, you know, the good thing about beginning an established series now is that the earlier books are still available as ebooks and may have shorter waiting lists than newer titles. People do seem to be re-reading the Interdependency series, so you’ll have to get on the list for that one (see how good The Last Emperox is? People are still reading the whole trilogy!) but as of this writing, the earlier Veronica Speedwell mysteries are available for checkout as ebooks!

If you want to start each of these series, here are the links to the first titles in both series:

The Collapsing Empire by John Scalzi (and here’s the eaudiobook)

A Curious Beginning by Deanna Raybourn