What would you do if you woke up one morning and discovered that you had become invisible? This is what happens to 15-year old Bobby Phillips in In Things Not Seen by Andrew Clements. He tells his parents and then is frustrated  by their immediately wanting to take control of the situation. Deciding to take matters into his own hands, he goes off to the library where he runs into a blind girl, literally. Mutual trust develops between them, as each feels truly seen by the other. 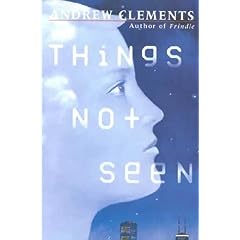 Lots of drama ensues as Bobby, Alicia and their scientist fathers try to unravel the mystery and reverse the invisibility. Bobby knows that his invisibility could have dangerous consequences for his family and that time is running out. He has to find out how to be seen again before it’s too late. In the end Bobby and Alicia triumph. Clements spins a compelling tale. The sequels, Things Hoped For and Things That Are, await. As the characters of Bobby and Alicia get older, so, too, does the intended audience.