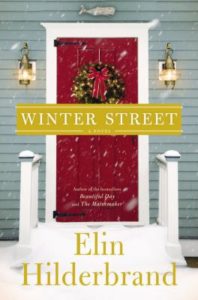 If you are looking for romantic escapist fiction set in an idyllic location to get your mind off of current events in the country, try one of Elin Hilderbrand’s Nantucket novels. Hildebrand has written many books based on Nantucket and it’s clear that she’s a perfect ambassador with her vast knowledge and love of this island and spot on sense of place.

Not typically a romance reader, I became totally engrossed in her short Winter Street novel this summer after entering Nantucket’s Winter Street Inn via talented Erin Bennett’s audio narration and following Innkeeper Kelly Quinn down the hall of the Inn as he opened the door to an allegedly empty guest room. Imagine his (and my) surprise when he found his second wife, Mitzi, in the arms of the man who had been hired as the Inn’s Santa Claus for the last dozen years or so.  After laughing out loud, I  knew I needed to read more about the Quinn’s extended family.

The Quinns are a blended family beginning with Kelly, the patriarch, who gave up his successful Wall Street career when his marriage to his first wife, Margaret dissolved after she decided to follow her broadcasting ambitions around the world and then became the face of the CBS Network Evening news leaving little time for family life. Kelly relocated and raised their three children on Nantucket, their favorite family vacation destination.  Patrick, the eldest and seemingly most responsible son, is a successful broker living the large life in Boston with his wife and sons until a breach in his professionalism is uncovered by the SEC which may cost him everything he has; Kevin, the son who never seems to reach his potential in life and love and Ava, an eager and loved music teacher on Nantucket, who is more successful in her career than in her love life. The fourth and youngest, pampered Bart, Kelly’s son by his second wife, granola crunching much younger Mitzi, joins the Armed Services after 9-1-1 and a less than stellar high school career and may be missing in the Middle East.

By the end of this book, I was totally in love with this family and quickly read the rest of the series-Winter Stroll, Winter Storms and Winter Solstice so that I could catch up with the Quinn family and follow their everyday lives which are filled with drama, pathos, infidelities, betrayal, joy and tragedy. When I got to the last page of the last book I knew I would miss them and the beautiful island of Nantucket. Each book that I’ve read after the Winter Street series including The Matchmaker, The Rumor,  and  The Indenticals  has brought me back to Nantucket and introduced me to new friends before ending much too soon.