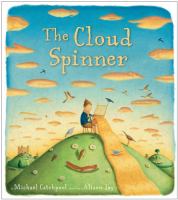 The Cloud Spinner by Michael Catchpool tells the tale of a young boy who learns how to spin clouds into a loom and turn them into cloth.  This cloth he can turn into cloths, and you get something softer and warmer than you can imagine.  You might think that the boy would be very popular and probably very rich.  But as you can see on the cover, he’s actually very content to be quite alone.  He’s a happy kid, and the animals and even the hills around him are happy (that’s not bacon and eggs just below him, by the way, it’s daisies and a squirrel).  In fact, it’s not until a pompous king gets wind of the boy’s talent that things go awry.  As soon as the king finds out he demands all sorts of cloud garments on par with poor Bartholomew Cubbins’ self-absorbed king.  This rather common king-like behavior wouldn’t be too bad except clouds, you know, don’t grow on trees.

The artwork in this book is dreamy wonderful.  Alison Jay, who did covers for The Goose Girl,

Red, Green Blue and I Took the Moon for a Walk comes again in her fascinating signature style that looks like something originally done by English monks and just recently unearthed. According to the book jacket, “her signature style is created using alkyd paint on thick cartridge paper, with crackle varnish that gives her illustrations an aged effect.”  Alkyd paint, I found out, gives the look of oil paint but dries much faster (helpful for meeting deadlines).  But it’s not just the tones and aged look that make the pictures so vibrant, it’s also that it seems like everything in the picture is alive and expressive.  Bacon and Egg hill, for instance, seems pleased to be hosting our title character.  The exaggeration and distortion in the portrayal of human characters, supremely fat kings, for instance, really fills out their personalities.

In a world that is becoming ever more resource appreciative, an attractive well told fairy tale is certainly a book of note for 2012.  Reserve a copy today!