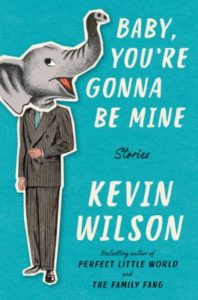 The imagination of Kevin Wilson is a weird and wonderful place. In his latest collection of short stories, Baby, You’re Gonna Be Mine, vividly drawn characters and arresting, sometimes outlandish situations combine to make it hard to put down. In the title story, a self absorbed musician comes home to live with his mother when his band’s equipment is stolen. He’s a slacker and a jerk, but the closing scene of his mother watching a video of him singing, after his fortune has changed and he’s leaving, movingly shows the extent of her impossible love and hopefulness for her child. In “Homecoming,” a father repeatedly rescues his adult son, culminating in one of the most bizarre, selfless scenes I’ve read. In another story, a young couple is called in to care for the children of the woman’s sister. Mom has been arrested for attempting to murder her husband with a kebab skewer. Descriptions of the living conditions and the state of the children is nothing short of anarchic. The teen-aged daughter spends most of her time painstakingly choosing weapons for her video game.  My favorite story, “Wildfire Johnny,” is about a man who inherits a magic razor. By cutting his throat, he is jettisoned back to 24 hours earlier, restored to health and having avoided a disagreeable situation. Moderation is not his strong suit. In another story, two misfits skirt the line between love and pain when they become obsessed with hurling ice cubes at each another. Wilson has a keen sense of the way that humans sabotage their own happiness and the fraught relationships we’re destined to create. It is impossible not to feel for his characters.

Wilson has penned some equally engaging, quirky novels. The Family Fang is about a pair of performance artists whose children suffer the brunt of their elaborate, subversive installations. Their final hoax is the most perplexing; or is it a hoax? Andrea blogged about this book here. In Perfect Little World ten couples with newborns are brought together to collectively raise their children and create a utopia in a secluded compound in the forest. Of course, utopias are the stuff of fiction and humans are hopelessly ill-equipped to sustain them. Andrea blogged about this book here.