Travel through history with pride this month with these YA novels that write queer people back into history, exactly where they belong. 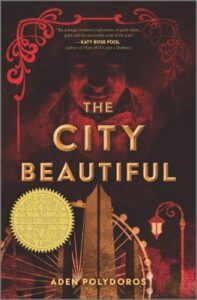 Begin in 1893 Chicago with The City Beautiful, a Jewish thriller set against the backdrop of the World’s Columbian Exhibition. Alter Rosen lives a quiet life these days. He performs his prayers, works at a Yiddish newspaper, saves money to bring his family from Romania, volunteers at the Chevra Kadisha preparing bodies for burial, and tries to avoid his guilt over his father’s death and feelings for his secret crush, Yakov. When Yakov becomes the latest in a growing list of missing boys from his tenement, however, Alter begins investigating, with the help of his communist friend Raizel, and his former partner-in-crime and current love interest, Frankie. The teens’ investigation becomes more urgent as Alter realizes he is possessed by Yakov’s dybbuk. Now, they must discover who Yakov was trying to kill on the night he died before Alter is completely overtaken. To find their target, they venture into the grimy darkness that lies just beneath the glamor and booming industry of the Gilded Age, finding abuse of workers and immigrants, white supremacy, and antisemitism at every turn. Author Aden Polydoros immerses readers both in the world of Jewish life—effectively communicating the quiet beauty of Jewish rituals and the unsettling danger of antisemitism—as well as its 1893 setting, through subtle details and discourses of the time and place. Though so thoroughly set in the 19th Century, The City Beautiful’s themes of love and justice continue to resonate into the present day.

Next, travel to 1932 Berlin, where a vibrant queer culture thrived, until the Nazis put a violent end to it. Kip Wilson’s latest novel-in-verse, The Most Dazzling Girl in Berlin, brings readers into this pivotal moment in history through the narrative of Hilde, who is newly eighteen and on her own after eight years in an orphanage. With millions out of work across the Weimar Republic, Hilde struggles to find work of her own. That is, until she stumbles into Café Lila, a queer night club. There, she finds not just a job working as a waitress and singer, but also the first true community she has ever known. Rosa, one of the singers at the club, quickly becomes the first home Hilde has known since the death of her mother. This sense of belonging is always under threat, however, as Nazi paramilitaries constantly roam the streets, raging against Jewish and queer people. With upcoming elections and instability in the government, everyone at Café Lila becomes increasingly concerned for their safety and their futures. Wilson’s verse brings readers into the intense emotions of this time when Hitler’s rise was not yet a foregone conclusion, revealing that it was never really foregone. Readers of The Most Dazzling Girl in Berlin are immersed in a dynamic world of people fighting back, for themselves and their communities—and falling in love, too. 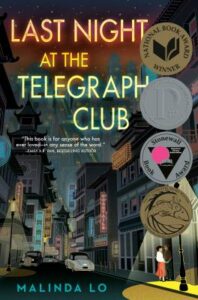 Finally, travel to 1954 San Francisco, with Last Night at the Telegraph Club. Under constant suspicions of Communist sympathies, threat of deportation, and general anti-Chinese discrimination, Lily Hu’s family and friends lead mostly pleasant lives punctuated by the pressure to assimilate. Now 17 and increasingly aware of what makes her stand out from even her tight-knit community in Chinatown, Lily finds herself on a path that will bring equal parts joy and love, fear and shame. Having finally gathered up the courage, and having found someone to go with, she begins making regular visits to the Telegraph Club, a lesbian bar. There, she and her new friend Cath get a crash course in the world of butches, femmes, and relationships outside of straight conventions. Bonded by their mutual interests in aeronautics and their clandestine late-night activities, Lily and Cath’s relationship quickly blossoms into a sweet romance. Their tenuous joy is thrown into chaos, though, when a raid on the Telegraph Club upends their lives. Inspired by pulp fiction novels, her family’s experiences, and the tiny mentions in history books of Chinese American rocket scientists and lesbians, Malinda Lo immerses readers in a more accurate vision of 1950s San Francisco, re-imagining the narrative of this time and place to include those formerly relegated to the shadows of history.