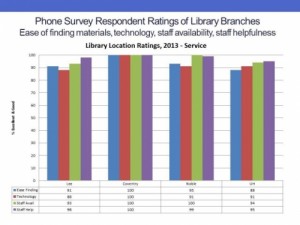 The community survey was the follow-up to a large community demographic study conducted by Heights Libraries in 2012. In April 2012, the Library contracted with NODIS (Northern Ohio Data and Information Service) at Cleveland State University’s Maxine Goodman Levin College of Urban Affairs to perform a comprehensive analysis of demographic and socioeconomic conditions, and the borrowing patterns of residents and patrons in our community.