Gideon the Ninth is one of the funnest, freakiest sci-fi/fantasy novels I’ve ever read. I am prone to hyperbole, but I promise that in this instance, it really is just that good. To illustrate, I will share that my brother-in-law Nate is not a particularly avid reader; so, when my sister and I started reading Gideon together during lockdown and she mentioned that Nate had picked it up, I wasn’t expecting for him to become obsessed or anything… but he very much became obsessed, reading the first two books in the series (the third is still on its way) several times, combing through Reddit fan theories, and joining my sister in a magnificent Halloween couple costume (see below!).

The series is set in a galaxy in which there are nine planets. Ten thousand years ago, there was some kind of apocalypse. One (human) man, by mysterious methods, resurrected himself and a handful of people. He, the King Undying, established nine Houses, one to each planet. There was a cost for this resurrection, however, and that is lots and lots of terrifying space ghosts who do not like the living. To protect the Houses, the King Undying embarked on some theoretical experiments with several devotees to expand their necromantic powers in order to survive the ghosts. These powerful devotees are called Lyctors, and they are immortal. Assistants to the Lyctors became extremely skilled in swordsmanship, and they are called Cavaliers.

Presently, Gideon lives on the planet of the Ninth House, which is a noble House of bone magicians — the ruling family can create full skeleton servants out of any piece of bone. Gideon has been a kind of whipping boy for the heir to the Ninth House, the Reverend Daughter Harrowhark. Gideon suffered through all kinds of abuse throughout her youth, but also learned how to be a sword-swinging renegade. She is pure muscle and snark. Gideon very much wants to escape the planet, but is always thwarted by Harrow, until one day when Harrow presents a suspicious opportunity: the King Undying, Necrolord Prime, has announced that he is in need of new Lyctors to ascend to his service, and he is inviting the heirs to each House to come together and compete in some sort of test. Each hopeful Lyctor-to-be needs an accompanying devoted Cavalier… will Gideon serve as Harrow’s? Can two people who have deeply despised one another since birth fool everyone into believing they are an unstoppable unified force?

This is when things truly heat up, including Gideon and Harrow’s complex relationship. Mysteries start to build, secrets start to unravel, and ghosts start hunting people. A content warning: there is blood and violence and lots of death. But if you can stomach it, and can allow yourself to be rather confused for the first several chapters, I 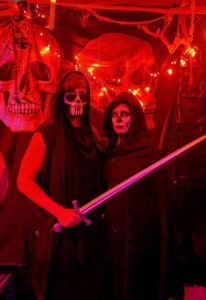 promise you will not soon forget this fantastic story and will be just as excited as my family is for the next book in the series.