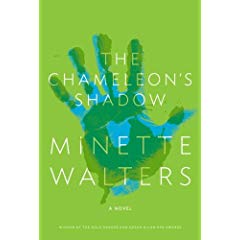 If you’ve never tried a book by Minette Walters and you like smart, chilling thrillers, The Chameleon’s Shadow is one to read.

Charles Acland, a lieutenant in the British forces in Iraq, is leading a convoy on the highway between Basra and Baghdad that is struck by a roadside bomb. Acland slowly returns to consciousness in a hospital in England, unsure of who or where he is, but wracked with pain, crippled and disfigured, profoundly angry, and fiercely isolated.  He is released from the hospital and makes contact with an eccentric but astute doctor who has her own issues, but takes a supportive interest in Acland. Meanwhile, a series of murders seems to point to this clearly unstable man, and the police are also taking an interest in him. Walters takes contemporary political and social issues and weaves them into a riveting story. The narrative is interspersed with newspaper headlines and psychiatric reports. Like Ruth Rendell, Walters creates complex characters with fascinating psychological issues. This one is a great read, as always from Walters.