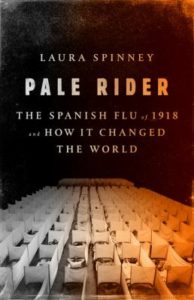 It’s early days in 2021, but in March it will have been a year since we first went into lockdown due to COVID-19. And if this winter has shown us anything so far it’s that, even with a vaccine, we have a ways to go before we can return to what used to be considered ‘normal’. But how much longer must we wait? I don’t have an answer to that question. But I can offer you a book that might help you come to your own conclusions.

I read Pale Rider: The Spanish Flu of 1918 and How It Changed the World during lockdown last spring, because sometimes escapist reading just isn’t enough to ease one’s anxieties. Written in 2017, author Laura Spinney pulls together current historical and scientific research to provide a narrative history of the 1918 pandemic. In her introduction, Spinney notes that until recently most of the data we had on the 1918 pandemic came from two main sources: countries in Western Europe and the USA, countries which had just lost tens of millions of people to WWI. Compared to the number of people who died in the war, the number of people who died of the flu in 1918 looks much less tragic, meaning the 1918 pandemic would unfortunately be glossed over in history books. Yet the 1918 pandemic was a truly global phenomenon. It’s estimated that 50-100 million people around the world, between 2.5-5% of humanity at the time, died of the Spanish Flu between 1918-1920. So what was happening in places like Brazil? Or China? Or South Africa? And what actually went down in countries like Spain or France?

Without getting bogged down in overly dry, academic prose, Pale Rider mixes science and history to wonderful effect. Spinney begins the book by briefly examining the history of the flu itself and what people from ancient times to the early 20th century knew, thought they knew, or didn’t know about germs, viruses, and disease. From there she uses government archives, private journals, and other primary sources to track the spread of the virus and the many ways different people and countries reacted to the disease.* After taking readers through the worst days of the pandemic, Spinney circles back to discuss the science of the flu, from why it changes every year to why and how the 1918 strain was so different, and then closes with a brief overview of the 1918 pandemic’s effect on the 20th century (politics, social practices, science, etc.). She also offers her thoughts on what we can learn from how the pandemic was handled to help prepare for, or avoid, future pandemics. Some of those lessons she mentioned in 2017 are spookily prescient now. She mentions “social distancing” to help stop the spread of a disease, for example.

In today’s context, Pale Rider might not be something you immediately want to read. Why read a book about an old pandemic when we’re currently in the middle of one? I wouldn’t blame you if you decide not to pick this up. Because of this book, I personally expect we’ll be wearing masks for longer than we might wish, which is not a pleasant thought. But if you wish to educate yourself about the 1918 pandemic and see what parallels exist between then and now, this is the book I suggest you read. It has shown me that others went through some of the same things we’ve experienced in the past year, shown me how they handled it, and helped me come to grips with our current situation. Maybe it will do that for you, too?

Pale Rider by Laura Spinney is available to be placed on hold at Heights Libraries and available as an e-book and audiobook through Overdrive/Libby.

*A less-serious story to share: To this day, the Spanish vehemently deny that the 1918 flu was theirs. Spinney is not sure why the name “Spanish Flu” stuck, but that is what British, French, and American sources call it. But each country had a name for it: Senegal called the “Brazilian Flu”, while Brazil called it the “German Flu”. People in Poland called it a “Bolshevik disease”, and Japan called it the “Sumo Flu” because their first outbreak happened at a sumo wrestling tournament. A bit of sociology among the science and history.