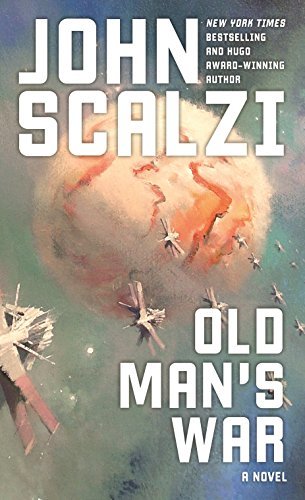 Every genre in literature has a subgenre within it that contains books that can be considered “comfort” or “cozy” reads, stories which are simply fun and don’t require too much thought on the readers part. A cozy read helps readers like us get through those inevitable reading funks. For mystery fiction such stories are called “cozy” mysteries. They’re called “comfort” romances for romance enthusiasts. Even horror has it’s “cozy” stories, which lean more toward being spooky rather than being nightmare fuel. The “cozy” equivalent for sci-fi stories is the “space opera,” melodramatic, galaxy-spanning stories which focus less on the “science” and more on the “fiction” of such adventures.

When it comes to space operas, it’s hard to find a better palce to start talking about the genre than with the works of John Scalzi. He has been one of the most prolific authors of the genre in recent years, having written several highly regarded book series’ in this genre. But his debut novel, Old Man’s War, remains one of his most popular stories. A friend of mine had consistently recommended it to me for years, so I finally decided to take the plunge and give it a shot. I liked it, and I can see why others do too, but it’s hard to talk about Old Man’s War without spoiling what makes the novel stand out from others like it. The premise of the novel is what caught my friend’s attention, so I’ll start there.

Old Man’s War takes place in a near-future setting where Earth has become a backwater planet. While the governments of Earth continue to squabble amongst themselves, a separate political entity, the Colonial Defense Force, maintains a gigantic space station above the planet as humanity’s jumping-off point to the rest of the galaxy. And the CDF has an offer available for everyone in the world: when you turn 75 years old, you can sign up to join the CDF as a soldier and fight for the galactic future of humanity. The CDF isn’t looking for eager youngsters. They need people with decades of living and experience to draw from to fight humanity’s war for survival in a hostile galaxy. And if you survive your two-year enlistment period, the CDF will gift you your own plot of land on one of the colony worlds you fought so hard for. It’s an offer folks like John Perry is willing to take.

As plot hooks go, asking people who are 75 years old to fight for the future of humanity is an unique twist on the “fight for humanity” trope in many sci-fi stories. How exactly does the CDF prepare these people to fight against hostile aliens? The rumor is that enlistees are given brand new bodies. Is that true? How does that work? The answers to these questions are provided to readers refreshingly quickly. And the rest of the book maintains this quick pace as readers follow Perry as he reminisces about his life and marriage, endures through basic training, survives battle after battle, struggles with the morality of what he’s doing for the CDF, and tries (but often fails) to learn physics. If you’re looking for a sci-fi read that doesn’t take itself too seriously, give Old Man’s War a try.

Old Man’s War is available through Heights Libraries or as an ebook through Libby/Overdrive.

If you would like some personalized book recommendations from the Matchmakers, we can do that for you. Just complete our Match Me Up! form on our site, and one of the Matchmakers will get back to you with a selection of books for you to try. We look forward to hearing from you.