The Matchmakers are delighted to once again welcome our guest blogger, librarian Bill Rubin! Bill writes:

Here’s a little-known fact to know and share: In Libraryland Icelandic authors are shelved under their given name, rather than their second name which is a descriptor, rather than a family name. Thus, Arnaldur Indridason is filed with the A authors rather than in I since his second name literally means Son of Indrida. Presumably if he has children they would be known as Arnaldurson. To make things a little more interesting, the second D in Indridason is actually pronounced TH and is represented in Icelandic by the letter Thorn which used to be a letter in Old English but has been dropped along with several others over the centuries. 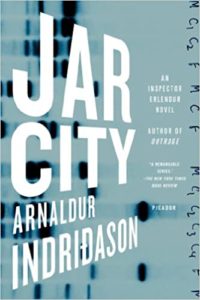 Arnaldur Indridason wrote 11 books between 1997 and 2010 featuring Inspector Erlendur of the Reykjavik Police, his colleagues and his family. The first two books in the series were never translated into English so the American series starts with #3, Jar City (ebook here). The books follow Erlendur as he solves many particularly Icelandic crimes, both current and cold case, as an established detective through to his retirement from the force. These were followed with three additional mysteries written in 2011 through 2014 about Young Erlendur at the beginning of his career. Again, the first of the three books has yet to be translated. Also available to American audiences is the Reykjavik Wartime Mystery series featuring Flovent and Thorson, two modern detectives who deal with modern mysteries that hark back to the days of World War II when Iceland hosted an American base and Reykjavik was filled with both Allied and Axis spies. The first title in this series is The Shadow District (ebook here).

Often the reader is at the mercy of the translation when the original books are not written in English. Despite the varying translators, the voice of the series is uniform so that the reader can assume that they are hearing Arnaldur’s own voice and can appreciate the writing. Interestingly, the books have been translated into over 25 languages and are a world-wide phenomenon.