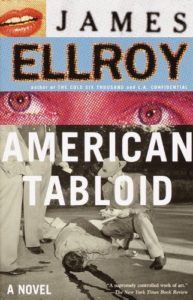 James Ellroy’s American Tabloid (Overdrive Ebook) is a relentless, character-driven story set between Nov. 22, 1958, and Nov. 22, 1963, right up to the moment before the assassination of John F. Kennedy. Tabloid depicts how a host of criminal and political elements shaped the course of American history. Specifically, the story follows three lawmen who begin the story in varying stages of crookedness. They are:

Pete Bondurant– A former LA Deputy Sheriff, now a feared shakedown artist, dope procurer for Howard Hughes and a hitman for Jimmy Hoffa, all in the first chapter. You have the money and need something done right? Call Big Pete. Just don’t mention his Quebecois roots.

Kemper Boyd– A FBI Special Agent tasked by J. Edgar Hoover with infiltrating the Bobby Kennedy-led McClellan Commission, which is investigating Jimmy Hoffa and his mob-connected Teamsters, in order to get close to the Kennedy’s. With expensive tastes and an unscrupulous attitude, Boyd should fit right in. Plus, he’ll be receiving paychecks from both the FBI and the Kennedy’s.

Ward J. Littell– Another FBI Special Agent and Boyd’s former partner. Currently doing menial black-bag work spying on communists for the FBI, he is eager for a move to the Bureau’s Top Hoodlum Program to investigate the mob. He may just get his wish. But will he be prepared for what the work involves?

Through their eyes, we see the workings of the Mob, the anger of Cubans exiled by Castro, the CIA and the Bay of Pigs invasion, and so much more. As a reader, we may already know where the book ends, but that’s no spoiler. It only adds to the drama. As I was reading, all I could think was, “How are these three involved in JFK’s assassination?” The journey there requires some fortitude. I often found myself reading 2-3 chapters at a time, putting the book down for a few minutes to process what I just read, only to then pick it up five minutes later and keep reading. Slow going, perhaps, but Ellroy’s staccato-style writing expertly conveys the gravity of their actions with as few words as possible. And it kept me hooked.

If that sounds like too much work, or too disjointed for you to enjoy reading, I’ll leave you with the line that begins his novel. If this doesn’t pique your interest, I’m not sure what else will:

“America was never innocent. We popped our cherry on the boat over and looked back with no regrets. You can’t ascribe our fall from grace to any single event or set of circumstances. You can’t lose what you lacked at conception.”