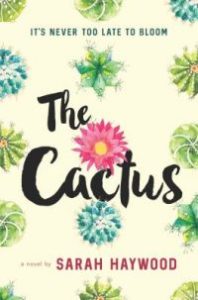 Sarah Haywood’s debut novel, The Cactus, is a perfect mashup of the books Eleanor Oliphant and The Rosie Project. Her character, Susan Green, is an independent, professional woman who has ordered her life so that every second and event is accounted for; she rarely (never) deviates or changes her mind about things. But, then, as in the real world, three events and an unexpected disclosure occur that shatter her perfectly ordered existence.

The first is the sudden death of her Mother and the discovery that Mum’s house has been left equally to Susan and her brother Edward. She has never gotten along with Edward as she considers him a lazy, bottom feeder and reprobate drunk who took advantage of their mother during her lifetime. To add insult to injury, he has been granted the right to stay in the house for as long as he wishes. Only then can the house be sold and the proceeds divided between them.

When a second situation arises(which you’ll learn or guess at early on) making it necessary for her to move out of her current home and in need of a quick influx of cash, she decides to contest the will. She is confident the will was written under duress because of her brother’s influence and can be overturned.

Then she must reevaluate the longstanding relationship she has with the attractive man she meets once a week for dinner and the theater, usually followed by sex in an upscale hotel.  These events and a late and shocking revelation could potentially unravel any progress she has made to change the course of her life. Despite her quirky often irritating personality, one can’t help but root for Susan and hope that she finds her way through the many challenges to the happiness that has so far eluded her.