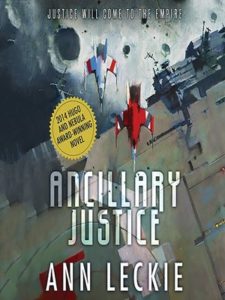 I first became aware of Ancillary Justice some time ago when Noble Branch Manager Constance suggested it to me. Since it is a sci-fi title, she asked me if I had heard of this book before and mentioned that, from what she gathered, it is very difficult to describe. I can confirm that Ancillary Justice is hard to describe, but it’s not impossible. Let me explain.

Written by Ann Leckie, Ancillary Justice is told through the eyes of Breq (pr. Breck), a soldier of the all-conquering, galaxy-spanning Imperial Radch on a personal quest for revenge. But she is not exactly human. She is the last ancillary of the Justice of Toren, a massive, sentient warship which was destroyed 19 years previous. Radchaii warships, through a process of melding human bodies with the ship’s AI, use these bodies to carry out its functions and assist its crew. These ‘ancillaries’ guard the captain, cook meals, handle clerical duties, and thousands of other tasks, all connected by the ship’s AI. They look perfectly normal, though they act and speak in ways which seem uncanny to conquered peoples.

Breq being an AI is where much of the confusion about Ancillary Justice stems from. Her description of events and people within them takes getting used to. For example, she refers to all of the characters in the story in feminine terms (she/her/hers) because she does not see a significant difference between genders. The lack of other pronouns can throw readers off at first. Breq’s concept of time is also very different from ours. One story she recalls sees two officers she and another ancillary are guarding attend a dinner at a local noble’s home. She recounts an argument her officers and this noble have over dinner, but then, in what appears to be the same conversation, describes the officers discussing that noble’s possible motives for provoking that argument. It is an abrupt change in subject, and it took me a moment to realize that the dinner is over and the officers are walking home because Breq never mentions a jump forward in time. To readers, that’s jarring. To an AI, they’re simply giving us the information we need to know, the other details in between these moments are irrelevant.

Now, you’re probably thinking, “Steve, this sounds confusing. Why should I read this?” To which I’d reply, “You don’t think this sounds interesting?” Doesn’t an epic sci-fi adventure which minimizes gender and is told in a way that’s alien to anything we will ever (or hopefully never) experience sound intriguing? It is a lot to take in at first, and Breq hardly ever stops to explain anything, but once you get through that initial confusion you’ll find a gripping story brimming with intrigue and action unlike anything you’ve read before. I haven’t even mentioned the world-building this book guides you through, or the characters Breq meets, remembers, and mourns. But Breq herself is what makes this story special, and if you persevere with her you’re in for a treat.

The ebook and audiobook of Ancillary Justice are available through Overdrive.