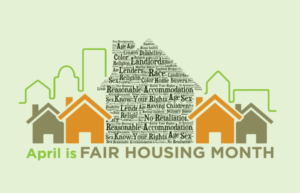 National Fair Housing Month celebrates the passage of the Fair Housing Act in April, 1968, a national law that prohibits discrimination in the sale, rental and financing of housing based on race, color, national origin, religion, and gender. To celebrate, we’ve put together a reading and viewing list to help you understand the importance, and impact, of fair housing in our communities.

Big Short: Inside the Doomsday Machine by Michael Lewis 330.973 LEWIS

Color of Law: A Forgotten History of How Our Government Segregated America by Richard Rothstein 305.8009 ROTHS

Democratizing Cleveland: The Rise and Fall of Community Organizing in Cleveland, Ohio  by Randy Cunningham 361.6 CUNNI

Detroit Hustle – A Memoir of Life, Love, and Home by Amy Helmerl B HAIME

Evicted: Poverty and Profit in the American City by Matthew Desmond 3369.4609 DESMO

Homewreckers: How a Gang of Wall Street Kingpins, Hedge Fund Magnates, Crooked Banks, and Vulture Capitalists Suckered Millions out of Their Homes and Demolished the American Dream by Aaron Glantz 332.722 GLANT

How to Kill a City: Gentrification, Inequality, and the Fight for the Neighborhood by P.E. Moskowitz 307.3362 MOSKO

The Monster : how a gang of predatory lenders and Wall Street bankers fleeced America–and spawned a global crisis by Michael Hudson 332.63 HUDSO

New Urban Crisis: how our cities are increasing Inequality, Deepening Segregation, and Failing the Middle Class-and What We Can Do About It  by Richard Florida 307.7609 FLORI

A Stronger Kinship: One Town’s Extra Ordinary Story of Hope and Faith by Anna-Lisa Cox 305.896 COX

When Affirmative Action Was White: An Untold History of Racial Inequality in Twentieth-Century America by Ira Katznelson 323.1197 Katze

Whiteness of Wealth: How the Tax System Impoverishes Black Americans–and How We Can Fix It by Dorothy Brown 343.7304 BROWN

Adam Ruins Everything – Disturbing History of the Suburbs

A Matter of Place by Fair Housing Justice Center

Homes for All – PBS documentary

Poverty, Politics, and Profit: The Housing Crisis by Frontline

Sold Out – Affordable Housing at Risk