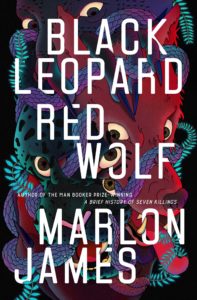 Black Leopard, Red Wolf (BLRW) draws from African history, mythology, and religion to present an incredible tale of fantasy and myth. In the lead up to BLRW’s release, author Marlon James called his Dark Star trilogy the “African Game of Thrones.”

There are similarities. Both stories feature complex networks of characters and places, and there is enough violence, sex, and intrigue in BLRW to match (and often outdo) Game of Thrones. However, BLRW is a different kind of story in many ways. Our narrator tells us up front that, “Not everything the eye sees should be spoken by the mouth.” In other words, he has no reason to tell us the whole truth. It is up to the reader to decide what to believe, which is a very African way of hearing a story.*

Allow me to explain. BLRW’s narrator is Tracker, a hunter known far and wide for his skill. Tracker “has a nose,” meaning he can follow a scent through any terrain no matter how far it travels. But we find Tracker at the start of the novel in a prison being interrogated by an inquisitor about the death of a boy who might have been heir to an empire. A boy Tracker and eight others were hired to find. And Tracker, a queer man who has a smart mouth to go with his nose, is one of only three survivors of the search and has quite a bit to say about what happened.

His story intensifies as you read, in ways that will be both familiar and strange to fantasy readers. It’s classic fantasy but with sharply African twists. He tells us of the people he worked with, characters like the shape-shifting Leopard and Sogolon the moon witch, who drop in and out of the story. He speaks of the monsters that try to prevent them from finding the boy, such as the bultungin, or werehyenas, and an impundulu, a vampiric lightning bird. He evocatively describes places like Dolingo, the grand but subtly creepy treetop city, or the Darklands, a forest where one can lose much but gain little. And there is so much more I can’t describe here.

I will admit that I began reading BLRW with the beautiful physical book, but finished with the excellently narrated audiobook. I knew very little about African myths and traditions before reading/listening to this, but whichever version you read is worth the effort. Future books in this trilogy will feature other members of the group hired to find the boy. Book two, Moon Witch, Spider King, tells the story from the moon-witch’s perspective. She disappears about three-quarters of the way through BLRW only to reappear near the end. She is one of the other survivors, and tells her captors that everything Tracker has told them is a lie. We’ll have to wait for the next book to hear her side of the story.

*Interviews with James about the story’s African influences: