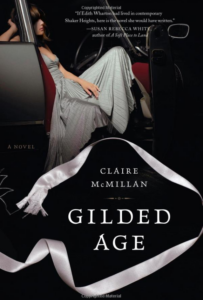 Gilded Age was published in 2012 and is written by local author Claire McMillan. The novel, set in Cleveland, is a modern retelling of Edith Wharton’s The House of Mirth.

I had not read the original, but felt it more than held its own. It reminded me a bit of The Great Gatsby, both in the lifestyle it depicted and because the story is told by a friend and devotee of the protagonist.

The writing itself is very good. McMillan is enjoyable to read and her narrator continually makes keen observations of upper-class social life. I was not surprised to find that she is a graduate of Bennington College, a place famous for its literary alumni.

The story is told from the perspective of a young married woman who comes from a prominent Cleveland family. Her best friend Ellie is back in town after a scandalous divorce in New York. Ellie is free-spirited and very much on the prowl for an eligible bachelor to marry in Cleveland.

I really enjoyed the local setting, including descriptions of the Cedar Fairmount neighborhood (where I live), Severance Hall, and one fantastic scene at the art museum where partygoers dress up as pieces from the collection. There is even a mention of the Jazz Bowl by Victor Schreckengost (we own a reproduction at the library which you can view in the Local History room at the Lee Road branch).

The novel provides a view into the glamor and scandal of old money Cleveland, the type of people who have box seats at Severance Hall named after their family.

As Ellie pursues, and is pursued by, one man after the next, her main attentions lie with the high-flying lawyer Randall Leforte, and an old family friend turned English professor, William Selden.

Alongside her the whole way is Ellie’s friend, the unnamed narrator of her story, who both roots her on and fears for her friend’s life.