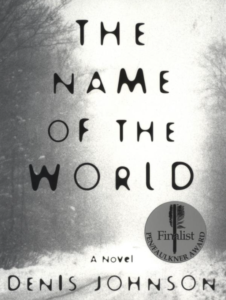 “In the strangeness of spring, finally without our hats, our jackets open, inhaling the warm air suspiciously, I’m sure we all looked like lunatics.”

The Name of the World is recommended reading for fans of the campus novel and any reader who enjoys thought-provoking, eloquent prose. The story centers on a college professor, one Michael Reed, a man who has undergone recent tragedy and is struggling to find meaning in its wake.

While the novel does contain elements you might expect—the dinner parties, the departmental politics, a precocious student or two—its primary action takes place inside the narrator’s head. As he wanders the campus ground (he doesn’t do much actual teaching), Michael Reed rediscovers the world around him.

There is a painting at the art museum he visits nearly every day. It features a series of concentrically drawn squares.

“Each unintended imperfection in an outline had been scrupulously reproduced in the next, and since each square was larger, each imperfection grew larger too, until at the outermost edges the shapes were no longer squares, but vast chaotic wanderings.”

There is a skating pond, or “reflecting pool”, around which the vital young circle.

“While I went around looking paralyzed or detached, my thoughts ripped perpetually around a track like dogs after a mechanized rabbit. Maybe this is why the young skaters looked so comfortable… No rabbit eluded them. They went in an endless loop, but they weren’t after anything.”

Unlike most novels, The Name of the World does not contain any individual chapters. Instead, it is written in one long, stream of consciousness-take that mirrors the central character’s state of mind.

Unsure if he wants to continue on at the university, Reed befriends a colleague one night at a faculty party. They meet in a glass dome which “used to be sort of a widow’s walk,” explains the Chairman of the School of Music. “I bring people up here because I’m curious whether it’s something with a recognizable purpose.”

Will Michael Reed find his way from the solitary remembrance of things lost to embrace life again? While this book deals with loss and grief, it is ultimately an uplifting journey – one I hope you will take.

The Name of the World, and Johnson’s celebrated story collection, Jesus’ Son, are available at Heights Libraries and OverDrive.