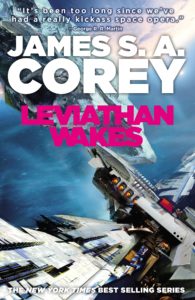 Leviathan Wakes tells a relatively standard sci-fi story featuring two men from very different backgrounds, Jim Holden, an officer on an old transport ship, and Joe Miller, a detective on a Belter station. The plot begins with Holden’s ship gets blown up while he and a few others were out investigating a derelict ship, while Miller is tasked with finding a missing girl from a wealthy family, and then is abruptly told to drop the case. Things escalate, and both get mixed up in situations involving government revolutionaries, shadow corporations, and alien technology.

But the story, while far from terrible, is not what kept me reading. I read this novel for the world-building, for making a near-future society that spans the Solar System seem believable while not weighing you down with the details. Set 200-300 years in the future, Leviathan Wakes takes place in a time when humanity has established a colonies on the Moon and Mars, built stations into the rocks of the Asteroid Belt, and has a few outposts on moons in the outer planets beyond. Some of the science that has made this possible is explained, but is never fully explored. For example, space travel is possible thanks to the Epstein Drive, an engine which allows ships to thrust up to speeds unheard of before. Outside of this explanation, nothing else about the drive is discussed. This allows the story to keep a whimsical, adventurous feel to it.

Leviathan Wakes also imagines what could happen to human bodies and behavior in these new environments. People living in the Asteroid Belt, for example, are typically very tall and have thinner bones because they live in places with minimal gravity to weigh them down. They’re also a bit odd, since it’s difficult to show emotion when you’re wearing a space suit, so they often express things like a shrug or nod with hand signals.

Martians also have altered bodies due to Mars’ lower gravity, but are more similar to their Earther cousins thanks to their shared experience of living on a planet. But they are not beholden to the Earth, much to the chagrin of Earthers who, according to Belters and Martians, are short, squat, and needy. And of course, as humans do, each group finds reasons to hate each other for these differences.

This interplay of people and characters from different parts of the Solar System is what drives this series, not just Leviathan Wakes. The story just gives characters things to do. With eight published books, several novellas, and a TV series, you certainly won’t lack for things to read or watch.

The Martian (by Andy Weir)