I don’t know about you, but I am indulging in a lot of feel-good, escapism reading lately. When the world feels like a giant dumpster fire, sometimes the only cure is books that make you forget reality, even for just a little bit. Here are three books I read recently that left me with a smile on my masked face. 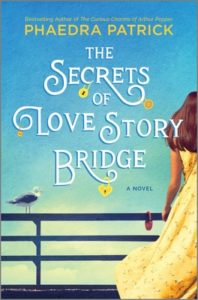 The Secrets of Love Story Bridge by Phaedra Patrick

It’s summer in the city and passions are soaring along with the temperature—for everyone but Mitchell Fisher, who hates all things romance. He relishes his job cutting off the padlocks that couples fasten to the famous “love story” bridge. Only his young daughter, Poppy, knows that behind his prickly veneer, Mitchell still grieves the loss of her mother. Then one hot day, everything changes when Mitchell courageously rescues a woman who falls from the bridge into the river. He’s surprised to feel an unexpected connection to her, but she disappears before he can ask her name. Desperate to find out her identity, Mitchell is shocked to learn she’s been missing for almost a year. He teams up with her spirited sister, Liza, on a quest to find her again. However, she’s left only one clue behind—a message on the padlock she hung on the bridge. As Liza slowly brings Mitchell out of his shell, we get to see him blossom into a more fully realized version of himself. This is the perfect book to curl up with a cup of tea and a blanket while you read! 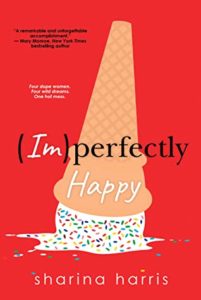 When four college friends formed the Brown Sugarettes Mastermind Group, they had very different goals–but matched each other in ambition. Yet ten years later they can’t help wondering what -happened to the hopeful, confident, driven women they used to be–and how to get them back… Longing for the support, advice, and tough love they once shared, all four resolve to start meeting up again. After all, their dreams may still be within reach. But are they worth the price they’ll pay to achieve them? We follow Raina, Nikki, Kara, and Sienna as they vow to get their lives back on track to achieve their greatest dreams – from writing a book, to becoming a master sommelier, to going on tour with a band, to becoming involved in politics. While each woman’s passion is different, they come together to support each other and help each other make things happen. I loved the friendship between Raina, Nikki, Kara, and Seinna, and I found myself wishing that I was a part of their group! I found myself cheering along as they reached for success and commiserating when they experienced setbacks. 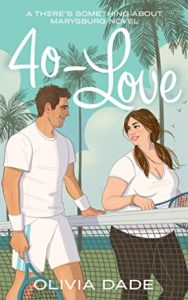 40-Love by Olivia Dade (ebook only)

When a rogue wave strips Tess Dunn of her bikini top, desperate, half-naked times call for desperate, please-cover-me-kids-are-coming-closer measures. Enter Lucas Karlsson, AKA that flirty Swede in the water nearby. When he prevents her bare buoys from being exposed to fellow vacationers, even an ocean can’t drown the sparks that fly. Lucas, a former top-level tennis pro now giving lessons at the resort, fled there after the abrupt, painful end to his injury-plagued career. But he’s finally ready to move on with his life—and after a few late-night, hands-on sessions with Tess, he’s eager to prove he’s the ace she wants. But this match comes with challenges: She’s forty, and at twenty-six, he’s barely old enough to rent a car. Worse, they only have two weeks together before Tess returns to her assistant-principal life in Virginia. During that brief time, they’ll have to play hard, take a few risks, and find out whether their chemistry is a one-shot wonder…or whether they’re meant to be doubles partners for life. This was a charming, laugh out loud book from page one, and the romance between Tess and Lucas is completely believable, despite their many differences. This is technically the second in a series, but it can easily stand alone.