You know, I honestly wouldn’t have thought that a dark, atmospheric historical mystery would fit the bill for my reading list right now. I just randomly pulled this off the shelf one day, and it was terrific. I would read more by this author for sure. 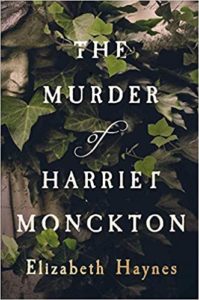 The book, which is based on a true story, is The Murder of Harriet Monckton by Elizabeth Haynes. Most of it is set in November 1843, when the body of twenty-three-year-old Harriet Monckton was discovered in the privy attached to the dissenting chapel, of which she was a faithful member, in the small town of Bromley, Kent. Harriet was known to be religious girl from a respectable family with ambitions to become a teacher in a girls’ school. Over the course of the book, Harriet’s secrets, as well as the secrets of the people around her, are revealed to the reader.

The story unfolds at just the right pace, showing that the most virtuous people are the ones who may have the most to hide, and that even the innocent may appear guilty in the eyes of their neighbors and friends. Nobody, especially Harriet, is who they seem to be. The historical details are beautifully rendered and serve to draw the reader into the Victorian era; and the book is on the longer side, which makes it possible to experience total immersion in this time period and this place.

I highly recommend this novel, and I usually steer clear of darker books. The minds and hearts of the characters and the slow but steady unfolding of the plot make this into a truly mesmerizing read.

Elizabeth Haynes has also written contemporary mysteries, such as Never Alone, Behind Closed Doors, and Under A Silent Moon.