October is the perfect month to read some spooky thrillers and mysteries! I don’t go too deep into the horror genre, but I do like a little scare every now and again. Here’s hoping that the weather cools down soon so that you can curl up under a blanket with some warm apple cider and one of these books! 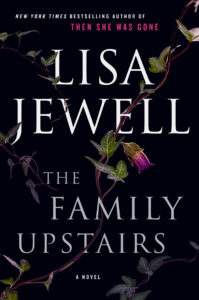 The Family Upstairs by Lisa Jewell

Three siblings who have been out of touch for more than 20 years grapple with their unsettling childhoods, but when the youngest inherits the family home, all are drawn back together. At the age of 25, Libby Jones learns she has inherited a large London house that was held in a trust left to her by her birthparents. When she visits the lawyer, she is shocked to find out that she was put up for adoption when she was 10 months old after her parents died in the house in an apparent suicide pact with an unidentified man and that she has an older brother and sister who were teenagers at the time of their parents’ deaths and haven’t been seen since. Meanwhile, in alternating narratives, we’re introduced to Libby’s sister, Lucy Lamb, who’s on the verge of homelessness with her two children in the south of France, and her brother, Henry Lamb, who’s attempting to recall the last few disturbing years with his parents during which they lost their wealth and were manipulated into letting friends move into their home. These friends included the controlling but charismatic David Thomsen, who moved his own wife and two children into the rooms upstairs. Henry also remembers his painful adolescent confusion as he became wildly infatuated with Phineas, David’s teenage son. Meanwhile, Libby connects with Miller Roe, the journalist who covered the story about her family, and the pair work together to find her brother and sister, determine what happened when she was an infant, and uncover who has recently been staying in the vacant house waiting for Libby to return. This is a slow burning, atmospheric read that kept me turning the pages to find out more! 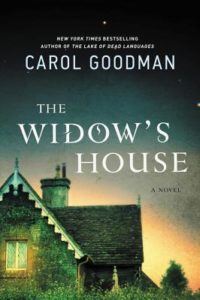 The Widow’s House by Carol Goodman

Hoping to rejuvenate their flagging writing careers, Clare and Jess Martin inadvertently move into a haunted house. Not everyone will survive. Back in college, both Clare and Jess were promising writers who met in the exclusive seminar taught by the enigmatic Alden Montague. Now Clare works as a copy editor to pay the bills, which have piled up since the advance on Jess’ second—still unfinished—novel ran out. Luckily, Montague offers them the position of caretakers at his Hudson River Valley estate, Riven House. But perhaps luck has little to do with the offer. The road to Riven House is as dark, twisted, and broken down as the house itself, an octagonal rarity riddled with water damage, abandoned rooms, and a painted-shut dumbwaiter. Once ensconced in Riven House, both Jess and Clare begin to write. Inspired by Montague’s story of how his great-grandfather broke the heart of the local Apple Blossom Queen, Clare begins to research the legend, discovering uncanny parallels to her own life. Illicit loves, illegitimate births, lost children, mothers driven mad—the Montague family’s past soon pierces the veil of Clare’s life. As the haunting intensifies, Clare sees shadowy women on the edge of the weir, hears invisible babies crying in the wee hours, and peels back layer after layer of identical wallpaper in the nursery. Goodman ratchets up the psychological tension, making Clare question everyone she has ever trusted. Why were her adoptive parents so distant? Why did Jess lie about his job offer back in Brooklyn? Who can be trusted? Goodman brilliantly channels the conventions of the Gothic ghost story, creating a delightfully spooky story that recalls elements from Shirley Jackson’s works. 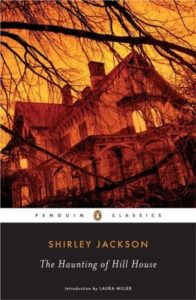 The Haunting of Hill House by Shirley Jackson

Three strangers are united by a scholar of the occult promising a summer of free lodging, modest pay, and amiable company. The four find themselves taking up residence in Hill House, a massive manor that has spent decades empty and has dozens of rumors surrounding it. Everyone is unsettled by the house which gives off an air of darkness and chill, but they band together to see if anything is truly off about it. Dr. Montague is the primary note taker and scholar, Theodora is a beautiful and engaging participant, Luke is the future inheritor of the estate, and Eleanor is poor, friendless, and determined to make the best of the situation. Small horrors begin to creep in and by the time they think to do something it’s too late. The Haunting of Hill House is one of those enduring classics for a reason – it’s a timeless tale that will continue to chill you to the bone! It’s quick, engaging, and best read with the lights on. Netflix’s adaptation is also worth watching, even though it deviates quite a bit from the source material. It’s also available to borrow, so read the book and then check out the show!