Are you in the mood for a couple of little short books that tell unique stories with a wealth of gorgeous detail? Nghi Vo creates a fantasy world based on ancient China and her storytelling is superb. Both books feature a cleric, Chih, whose pronouns are they/their and who travels around the kingdom collecting stories. This sounds like a perfectly delightful job, honestly, and Vo lets us hear the stories while Chih is transcribing them. 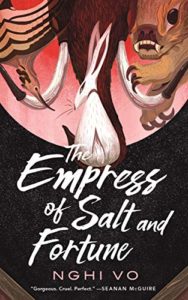 In the first book, The Empress of Salt and Fortune, Chih is journeying through the empire to the capital city to attend the coronation of the new empress. They break  their journey at Lake Scarlet, where the dowager Empress was exiled after she delivered an heir, so they can archive the history of the empress who lived there. The story is told in third person limited from the viewpoint of Chih, the cleric; and in first person from the viewpoint of Rabbit, the personal servant of Empress In-yo. There is political strife and intrigue and plotting and fortunetelling and games. Each chapter begins with a list of artifacts discovered by Chih that are the springboard for a new story from Rabbit.

In the second book, When the Tiger Came Down the Mountain, Chih  is traveling through the mountain foothills with a mammoth rider when they encounter three tigers who possess the ability to shift at will between their tiger and human forms. Chih and the tigers, by trading their versions of old stories, discover that traditional tales can be told in different ways, depending on whether the storyteller is human or tiger. The prose and storytelling are delightful and the drama is heightened by the possibility of Chih and their companion being eaten by the tigers at the conclusion of their tale.

If you’re looking for a couple of beautiful, short reads, these books will thoroughly satisfy you. They are the beginning of a series called The Singing Hills Cycle, so we can hope for more beautiful books in the future. Also, the covers. Did I say I love the covers? I love the covers!