At our recent Matchmakers’ meetings, Carole talked about rereading Daphne DuMaurier’s Rebecca which she has done a number of times. She said that DuMaurier was in top form when she wrote this and set the standard for Gothic Romantic Mystery. Cetainly rereading a book brings to light things that you may have overlooked on the first reading, and especially when the book ends with a surprising twist; a second read allows you to see how skillfully the author used foreshadowing. DuMaurier’s forershadowing, accordining to Carole:  exquisitly subtle.

With so many new books to add to a “to read” list appearing every day, it’s hard to commit to reading a book a second time. When my book group decides to choose a book I’ve already read, I set out to skim it to refresh my memory, but often I get drawn in all over again and end up reading it word for word, and I’m always rewarded with more insights and appreciation. Here’s a list of books that sparked great discussions and that I’ve tried to skim, but happily read twice:

An American Marriage by Tayari Jones. The life of newlyweds Celestial and Roy is horribly interrupted when he is accused of crime of which he is innocent, but convicted.

Eleanor Oliphant Is Completely Fine by Gail Honeyman. Socially inadept Eleanor is stuck to her routines, but life becomes unpredictable when she and a friend save the life of a man who has fallen on the sidewalk. 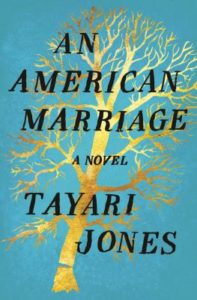 Fight No More by Lydia Millet. Nina, a real estate agent moves through the houses of L.A.’s wealthy elite and discovers the heartbreaking and heartening in this book of interconnected short stories.

Little Fires Everywhere by Celeste Ng. The lives of artist and single mother Mia and daughter Pearl collide with the Richardson’s, an upper middle class family living in unconscious privilege.

Arcadia by Lauren Groff. The rise and fall of an idealistic commune in the 1970s and the struggles of the children who were raised there, then forced to join the rest of the world.

The Cat’s Table by Michael Ondaatje. The adventures of three boys on board a ship bound from Sri Lanka to England in the 1950s.

Commonwealth by Ann Patchett. The summers the children of two families spend together in Virginia and the pivotal moments that change them.

A Gentleman in Moscow by Amor Towles. Count Rostov is sentenced to house arrest at a grand hotel and lives a suprisingly rich life without leaving the premises.

P.S. The library also has copies of the movie version of Rebecca, and I’ve watched the moody, black and white 1940 film at least twice. It was Alfred Hitchcock’s first Hollywood movie and won an Academy Award for cinematography. It features the lovely Joan Fontaine as Max DeWinter’s second wife. Laurence Olivier is at his handsome, pouty best as Max, and Judith Anderson delivers as the so sinister Mrs. Danvers.