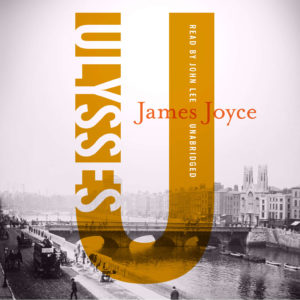 If you have decided to read this post, I’m going to you assume you either really like Ulysses and want to read me gush about how wonderful and unique and smart it is, or you don’t like Ulysses and want to read me verbally tear it to pieces for being overrated, obtuse and overwrought with self-important ramblings. But I didn’t read Ulysses, I listened to the audiobook. And I have to say, I’ve never experienced anything quite like it.

For those of you who haven’t realized what you’ve gotten yourself into yet, Ulysses, written by James Joyce, is a novel written in a ‘stream-of-consciousness’ style in which the reader follows a character named Leopold Bloom as he goes about his day in Dublin, Ireland on June 16, 1904. The prose fluidly shifts from what characters say, to what they are thinking, to what is happening in the environment with little indication of which statement is which. Joyce’s choice of writing style, which I found dense, evocative, and pretentious by turns, plus the fact that much of the story and many of the characters parallel the plot and characters of Homer’s Odyssey, has led some writers to call Ulysses one of the greatest novels ever written, while others vehemently dislike it. I wasn’t sure if I’d ever read it, but I decided to listen to the audiobook on a whim when I found it on our shelf.

The copy I listened to is read by John Lee, a notable audiobook narrator who has also read such books as A Feast for Crows, book four of the Game of Thrones series, and Ken Follett’s novel The Pillars of the Earth. I found Lee’s reading of Ulysses to be easier to follow than I expected. He does a good job of distinguishing a character’s thoughts, actions, and spoken dialogue with his tone of voice, taking the burden of that job off the reader which allows them to just follow the flow of Joyce’s writing. But whenever I got distracted for a moment and then refocused on the audiobook, I often found myself suddenly lost with no idea of what was happening because thoughts and events move that quickly in this story (and trying to rewind usually didn’t help). Yet I really enjoyed listening to Lee cycle through various Irish accents as he insultingly called other character’s “fearful Jesuits” and guided me through Dublin. I even enjoyed some of the story too.

Maybe that sensation of getting swept up and carried away in the writing is why some folks love this novel so much? I’ll admit I now admire Ulysses for what it is, but I might have felt differently about it if I had tried to sit down to read it in print. I’m not sure if I will ever read it again, but I don’t regret giving the audiobook a shot. I finished it, for what that’s worth.

The audiobook of Ulysses is available to be put on hold through both Heights Libraries and Libby/Overdrive.