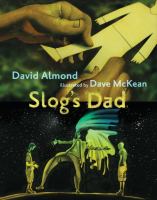 Now, Slog’s Dad is not a new one. David Almond published it as a short story in a book called So What Kept You? and saw success from critics for the next few years.  Dave McKean created (and I stress created, rather than drew or painted) illustrations for the book in 2010.  So this book has been a long time coming in the form we get it in.  I found it recently when choosing books to read aloud to our after school crowd.  I think I went on the strength of names alone.  David Almond seems to have a bead on the way kids are puzzled endlessly by what it is adults seem to do with their lives and wonder what it’s like to be one.  There is a magic about age 11, when you can hold in your mind both the reality and wishfulness of a thing.  Slog’s Dad gently holds this magic up for inspection.  Slog’s pa passed away some time ago, but there he is, sitting on the park bench right in front of Slog and his friend Davie.  We learn through alternating bits of story and Mr. McKean’s stylish and spooky illustrations about Joe Mickley, how he lost his legs and expected to get them back in heaven, and how wrenching it was for Slog to end up losing his dad.  And now to see him on a bench in the park!  Can you imagine how excited Slog felt?  Davie doesn’t think this guy reminds him of the Joe Mickley he knew, and when Slog’s “dad” takes Davie’s sandwich (saveloy with everything), he’s even less sure that Slog isn’t just seeing what he wants to.

The illustrations make the story whoosh along, coming in a variety of media and giving the reader glimpses of memories, scraps of thoughts, and neon colored fantasies.  It’s a strange mix of very real and very emotional, very exact and very random.  This is just the right tone for the a story about a boy who misses his dad so much that his excitement and relief at seeing him on a bench one day is strong enough to thin the veils between worlds, even if it’s just a brief moment.