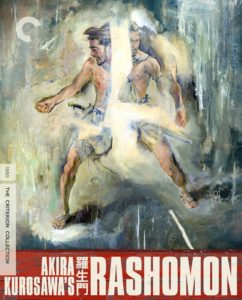 I know we normally talk about books on this blog, but the book I was going to write about this week is not widely available at the moment, so instead I’m going to talk about a movie which inspired a book (eventually a series) I enjoy. Rashomon, winner of the Academy Award for Best Foreign Film in 1952, is widely considered to be one of the finest Japanese films ever produced. Directed by Akira Kurosawa, Rashomon is perhaps most famous for the way it tells its story.

Set in 12th century Japan, Rashomon begins with a woodcutter and a priest sitting through a torrential rain storm under the run-down Rashomon gate outside of Kyoto. The woodcutter, with a stunned look on his face, says to the priest, “I don’t understand it.” The priest says nothing. The two are joined by a commoner seeking shelter from the rain who asks them what they are so glum about. The woodcutter explains that he found the dead body of a samurai in the woods while going to chop wood. Both he and the priest, who passed the samurai and his wife on the road shortly before he died, gave their testimonies to the local police and stayed to listen to three eyewitness accounts of the samurai’s death. It is these accounts which have caused them such distress.

Rashomon‘s story-telling style, where we hear and see the same story told in several different ways, provides the central drama to the movie as the three men at Rashomon gate argue over who truly killed the samurai. Scenes that are recreated later to tell another witness’ story look very different from what another witness said before, leaving you with plenty to puzzle over and reexamine. Rashomon also has plenty of that old school “movie magic.” The scene where the medium is possessed by the samurai’s spirit as he tells the court how he died is one of the coolest, creepiest things I’ve ever seen in a movie. It is an affecting movie, one cannot help feeling the tension the actors portray or getting drawn into the puzzling nature of their testimonies. And there is a twist at the end which complicates things even more, throwing everything into question again. If you like psychological thrillers, this movie is right up your alley.

You can order the DVD of Rashomon from Heights Libraries or stream it on Kanopy using your library card.