Pura Belpré was the first Latina librarian at the New York Public Library.  The Pura Belpré awards were created in 1996 to honor her legacy and to support Latinx creaters.  The awards are presented annually to the “Latino/Latina writer and illustrator whose work best portrays, affirms, and celebrates the Latino cultural experience in an outstanding work of literature for children and youth.”  One of the books honored this year is about Pura Belpré herself and the impact she had on so many children.  Below is a full list of the 2020 Pura Belpré award winners and you can check them out at any Heights Library branch. 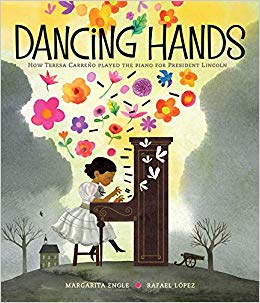 As a little girl, Teresa Carreño loved to let her hands dance across the beautiful keys of the piano. If she felt sad, music cheered her up, and when she was happy, the piano helped her share that joy. Soon she was writing her own songs and performing in grand cathedrals. Then a revolution in Venezuela forced her family to flee to the United States. Teresa felt lonely in this unfamiliar place, where few of the people she met spoke Spanish. Worst of all, there was fighting in her new home, too–the Civil War.  Still, Teresa kept playing, and soon she grew famous as the talented Piano Girl who could play anything from a folk song to a sonata. So famous, in fact, that President Abraham Lincoln wanted her to play at the White House! Yet with the country torn apart by war, could Teresa’s music bring comfort to those who needed it most? 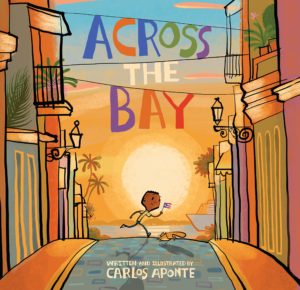 Across the Bay by Carlos Aponte

Carlitos lives in a happy home with his mother, his abuela, and Coco the cat. Life in his hometown is cozy as can be, but the call of the capital city pulls Carlitos across the bay in search of his father. Jolly piragüeros, mischievous cats, and costumed musicians color this tale of love, family, and the true meaning of home. 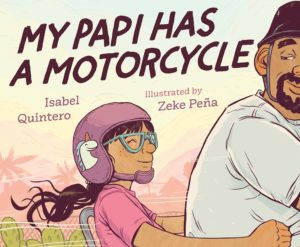 My Papi Has a Motorcycle illustrated by Zeke Peña, written by Isabel Quintero

When Daisy Ramona zooms around her neighborhood with her papi on his motorcycle, she sees the people and places she’s always known. She also sees a community that is rapidly changing around her.  But as the sun sets purple-blue-gold behind Daisy Ramona and her papi, she knows that the love she feels will always be there. 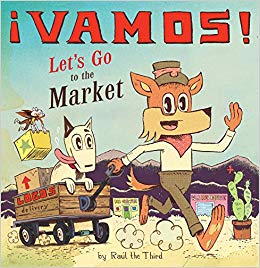 ¡Vamos! Let’s Go to the Market by Raúl Gonzalez

Bilingual in a new way, this paper-over-board book teaches readers simple words in Spanish as they experience the bustling life of a border town. Follow Little Lobo and his dog Bernabe as they deliver supplies to a variety of vendors, selling everything from sweets to sombreros, portraits to piñatas, carved masks to comic books! 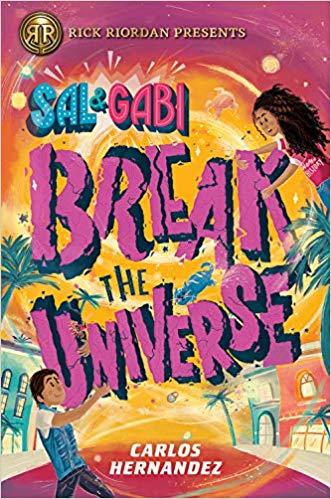 Sal and Gabi Break the Universe written by Carlos Hernandez

When Sal Vidon meets Gabi Real for the first time, it isn’t under the best of circumstances. Sal is in the principal’s office for the third time in three days, and it’s still the first week of school. Gabi, student council president and editor of the school paper, is there to support her friend Yasmany, who just picked a fight with Sal. She is determined to prove that somehow, Sal planted a raw chicken in Yasmany’s locker, even though nobody saw him do it and the bloody poultry has since mysteriously disappeared. Sal prides himself on being an excellent magician, but for this sleight of hand, he relied on a talent no one would guess . . . except maybe Gabi, whose sharp eyes never miss a trick. When Gabi learns that he’s capable of conjuring things much bigger than a chicken–including his dead mother–and she takes it all in stride, Sal knows that she is someone he can work with. There’s only one slight problem: their manipulation of time and space could put the entire universe at risk. 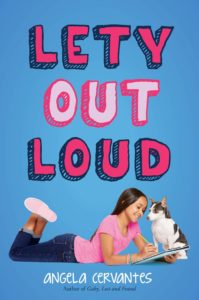 Can Lety find her voice before it’s too late?Lety Muñoz’s first language is Spanish, and she likes to take her time putting her words together. She loves volunteering at the Furry Friends Animal Shelter because the dogs and cats there don’t care if she can’t always find the right word. When the shelter needs a volunteer to write animal profiles, Lety jumps at the chance. But grumpy classmate Hunter also wants to write profiles — so now they have to work as a team. Hunter’s not much of a team player, though. He devises a secret competition to decide who will be the official shelter scribe. Whoever helps get their animals adopted the fastest wins. The loser scoops dog food.Lety reluctantly agrees, but she’s worried that if the shelter finds out about the contest, they’ll kick her out of the volunteer program. Then she’ll never be able to adopt Spike, her favorite dog at the shelter! 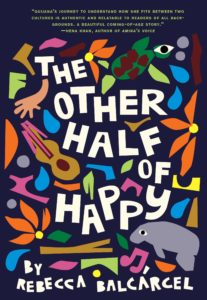 The Other Half of Happy by Rebecca Balcárcel

One-half Guatemalan, one-half American: When Quijana’s Guatemalan cousins move to town, her dad seems ashamed that she doesn’t know more about her family’s heritage.
One-half crush, one-half buddy: When Quijana meets Zuri and Jayden, she knows she’s found true friends. But she can’t help the growing feelings she has for Jayden.
One-half kid, one-half grown-up: Quijana spends her nights Skyping with her ailing grandma and trying to figure out what’s going on with her increasingly hard-to-reach brother.  Quijana must figure out which parts of herself are most important, and which pieces come together to make her whole. 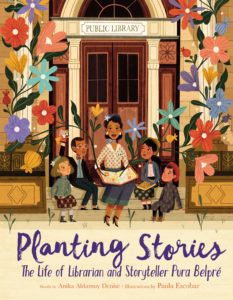 When she came to America in 1921, Pura Belpré carried the cuentos folklóricos of her Puerto Rican homeland. Finding a new home at the New York Public Library as a bilingual assistant, she turned her popular retellings into libros and spread story seeds across the land. Today, these seeds have grown into a lush landscape as generations of children and storytellers continue to share her tales and celebrate Pura’s legacy. 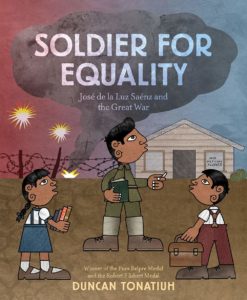 José de la Luz Sáenz (1888-1953)–or Luz–believed in fighting for what was right. Although he was born in the United States, he and his family experienced prejudice because of their Mexican heritage. When World War I broke out, Luz volunteered to join the fight. Because of his ability to quickly learn languages, he became part of the Intelligence Office in Europe. However, despite his hard work and intellect, Luz often didn’t receive credit for his contributions. Upon his return to the US, he joined other Mexican-Americans whom he had met in the army to fight for equality. His contribution, along with others, ultimately led to the creation of the League of United Latin American Citizens (LULAC), which is the oldest Latino civil rights organization.