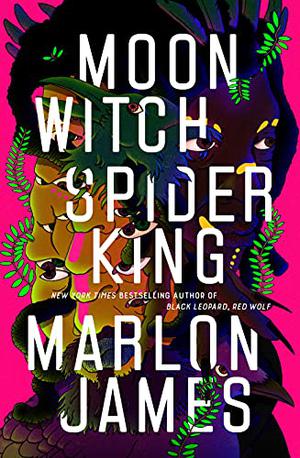 One of my favorite books from recent years is Black Leopard, Red Wolf (BLRW) by Marlon James, a fantasy novel with sharp, African twists on traditional fantasy tropes. There is a lot I liked about it, but the thing that intrigues me most is that it is the first of a trilogy of books in which each book will tell the same exact story, but will feature a different character’s version of the story (like the movie Rashomon). Moon Witch, Spider King (MWSK) is the second perspective in this non-linear trilogy, told by Sogolon, a 177-year-old woman who was a sometimes ally, sometimes enemy to BLRW’s narrator, Tracker. And her perspective raises plenty of questions about his version of the story, and questions what the story is actually about.

Whereas BLRW mostly focused on the search for a boy who some claimed to be the true king of a kingdom ruled by increasingly inept and cruel pretenders, Sogolon is able to give readers the wider historical and political context in which that search takes place. She’s lived it, she’s experienced the history, and her story tells us much of that history. Sogolon starts life as an abused, neglected sister to three brothers who hide her in a termite hill. She escapes and ends up being taken in by a whore-house mistress who found her in a ditch, before then catching the attention of a woman at the noble court searching for her unfaithful husband. It is a history hemmed in by the will and desires of men, and her journey to become the Moon Witch stands in defiance of those barriers.

One man in particular appears over and over again in her story: The Aesi. Chancellor to the King, an immortal god-killer who can manipulate people’s memory and rule the kingdom through them. She has many reasons to hate this man, and their century-long (or is it centuries-long?) battle of wits is central to Sogolon’s tale. For Sogolon, the search for the boy is merely an afterthought. This is a violent story, an angry story, a story in which Sogolon comes to embody the righteous anger of women oppressed by the men in power. Whether or not you believe her story is another matter. If you can’t completely trust Tracker’s tale in BLRW, should you trust Sogolon’s version of the same story? I lost sleep over that question. I can’t remember the last time a book did that to me.

As intriguing as the story MWSK is, the world in which it all takes place is just as interesting. Unlike BLRW, Sogolon takes more time to describe the cities and jungles she visits and lives in. In this story, for example, there is a city district which rises into clouds after the sun goes down and hosts upper-altitude gladiator matches. Shape-shifting lions sit and drink beer with common people in the taverns of this district. And the only way to get to the district at night is to walk off a cliff onto floating rocks to make your way up to it. World-building like this litters this novel, giving it an atmosphere unlike many other fantasy novels you could read.

Of the two books of this trilogy written so far, this might be the one to start with. MWSK is more linear story than BLRW, which makes the story Sogolon tells much easier to follow. However, the book is written in a patois that some may have trouble reading and making sense of at first. If reading it is a struggle for you, I highly recommend you try the audiobook narrated by Bahni Turpin. She’s excellent, and really brings both Sogolon and the world to life in her reading. Hearing the cadence of each sentence will hopefully help you better understand the story Sogolon is telling. Regardless of how you choose to read this, MWSK offers a different type of fantasy that is a must-read.